Log in... / Register
Your favourite recipes
Your ingredients
What you can make

Frost the rim of a cocktail glass with salt. Shake all the ingredients together with cracked ice. Pour into the glass. 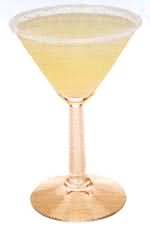 Leave some comments about the Margarita

Is it time to get your lad out with a Margarita ?
by Angela Gray

'I would like to point out that Triple sec simply means- triple distilled. 'Triple Sec is a specific liqueur, one of the de Kuypers range. Orange curacao for cocktail mixing. A margarita made with Cointreau or Grand Marnier isn't really a margarita. Nice, but not a margarita.
by stevebar

Triple Sec is an orange flavoured spirit similar to Cointreau. Depsite hating Tequilla due to a night of too many slammers this isn't half bad.
by Grettal

Its better frozen and strawberry falvoured
by Cocktail lover

Fantastic but I used cointreau instead of triple sec!!
by Gorgeous Gran

Havnt tried it yet cuz i av no idea wat triple sec is! Can anyone help?
by Flick

I like it 5:3 shots Tequila/Triple Sec and the juice of 5-6 fresh limes plus four ice cubes serves two. If you don't like it sour add Jose Cuervo Margarita Mix. NEVER use Roses cordial
by BigAl

This is one of the most sophisticated classic cocktails. It is refreshing yet has bite-delicious!!
by Rosalind

Well' I tasted this Cocktail and kind of liked it and it's nice to taste the classic cocktails. . it ain't that great though. . .
by BarBeatGuy

How should I mix the ingredients in right proportion to make it more sour? Besides Margarita, which cocktail is sour in taste?
by Peony

This's the cocktail I like best. But I have always used 1oz Tequila, 1/2 cointreau, 1oz lime juice, 1/2oz sugar syrup. Let's try it.
by Van

really nice set up to joint me in summer light pool sunshine.
by dany

The female version that i know of was to use 2 part tequila, 1 part vodka, 2 part cointreau (more oragey), and 1 part lemon and lime juice. its less sharp and juss that little bit more colourful for the ladies. i still perfer the 3,2,1 combo though.
by Lee

I agree with Ford Prefect-- the Margarita is the queen of cocktails. However, I have always used the ratio of 3,2,1. That is 3 parts Tequila, 2 parts Triple sec and 1 part Lime juice. I would like to point out that Triple sec simply means- triple distilled. Cointreau and Grand Marnier are good examples. I always use Cointreau.
by Bondi

If the Martini is the king of cocktails, then the Margarita is defently the queen. it is a great drink to strong and yet not to weak, it is great with a cigarette after lunch. or sitting on the beach. its taste is sour yet sweet. as the saying goes'drinking margaritas bangin sinoritas
by Forf Prefect

This version is very sharp and macho (but that's a good thing), up the tequila a bit and add sugar for a fem version or Cointrea in plase of TS with double the Tequila to fall over. Best to try all versions just to be sure :-) But rememember that Margarita mix is for people that eat white sliced bread.
by Lawn_Dart